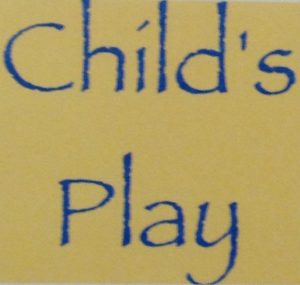 It’s been a long and challenging fall, but CHILD’S PLAY, the first book in my West Virginia trilogy, is ready for Park Place Publications. Here’s a draft of the “blurb” for the back cover:

Everything thirteen year-old Eden Jones knows, she learned from watching television. Bethanne Swanson learned her lessons from fifty years in the school of hard knocks. Both feel like losers. Yet a tragedy in small-town West Virginia brings them together and forces them to tap resources they never knew they had. Eden’s best friend and Bethanne’s sister are found dead in a yellow Mercedes at the bottom of Lake Charles. Why would the poverty-stricken teen, Ray-Jean, have been riding with Mary Margaret, the town’s wealthiest woman? Did someone tamper with the car, causing it to plunge into the lake?

The only way to find out is for Eden and Bethanne to pool their talents and follow the clues no one seems to want discovered. What secrets is Mary Margaret’s family hiding? Did Ray-Jean’s snooping go too far? What role do the town’s most prominent citizens play? As these two unlikely partners unearth the sordid facts, their bond grows far stronger than a bumbling collaboration between amateur sleuths. Despite the differences in their ages and experience, they end up not just friends but true soulmates.

If all goes well, you can order CHILD’S PLAY from Amazon in early spring.