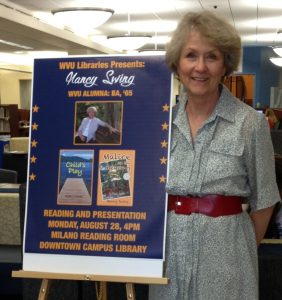 The final stop on my book tour: Morgantown, where I attended West Virginia University as an undergrad. The WVU Libraries hosted local friends and me for a tour of the special collections and behind the scenes. Really heartwarming to see all the upgrades in the Downtown Library since my day, especially how well the new addition has been married to the old building, preserving its facade with a light-filled, glass-covered atrium between the two structures. Another highlight was seeing the instruments used by the young George Washington in surveying what was then western Virginia, as well as correspondence about that remarkable effort.

Spent an engaging hour with John Cuthbert, Director of the West Virginia and Regional History Center, discussing not only the donation of my books, manuscripts and memorabilia to the Library, but also the growth of the University Libraries, plans for the future, and his own fascinating career.

The afternoon ended in the Milano Room with a group of interested folks for a lively conversation ranging from writing to challenges facing the state and its citizens. Many thanks to John Cuthbert, as well as Paula Martinelli, Development Director of the WVU Libraries; Lori Hostuttler, Assistant Director of the West Virginia and Regional History Center and Nancy Van Gilst Rice for gathering Morgantown friends for lunch and the afternoon’s events. Special thanks to Deb Miller, who got the whole ball rolling months ago.