When I started Where in the World?, the COVID lockdown prevented me from accessing photos in storage that would have illustrated my posts. Now the lockdown has eased somewhat, and I can get to those albums. In the meantime, many of you have sent feedback sharing your own overseas experiences and/or support for these excerpts from my journals and letters home from overseas.

So I’d like to dedicate Post #8 to photos and feedback, trying to match them as well as I can.

In the sixties, when I went to India, folks who were interested in photography were advised to shoot slides, not stills, so I bought a bunch of rolls and climbed on the plane. Now, over 50 years later, I’ve discovered that all my India slides have turned so dark you almost can’t discern what the subject is. Slides of us with Indian friends, dressed in salvar kemiz or saris, visiting the chawls, working with local counterparts — all are black silhouettes against a slightly lighter background. I did manage to find a scrapbook clipping from the WVU student newspaper, showing me back in West Virginia and modeling my everyday cotton sari (yep, I really did work in that). Here’s all that’s left from the images of India days. 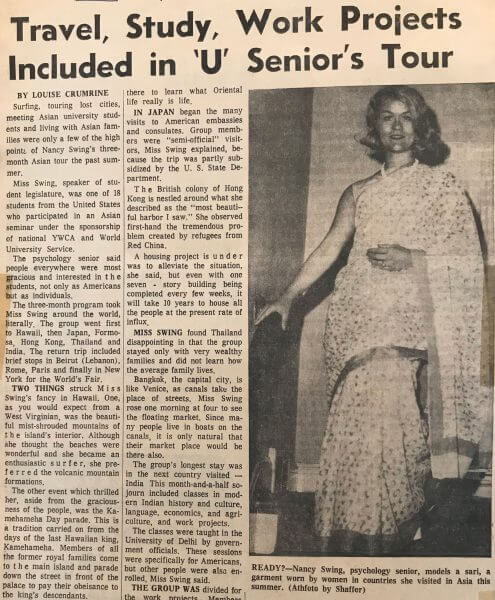 Mary Jo wrote:
What a hard yet challenging experience….I am often amazed how one little thing can impact the rest of our lives and get us where we are needed.

Michael wrote:
I could relate to what you had to say about India and Afghanistan….I spent 3 years on the road not connected to a school or government program. Part of the time living and working in third world countries. Therefore I also experienced weeks of culture shock and the runs!! … [Some years later] I worked…at Friends World College. FWC required students to live and study in two different cultures from their own prior to graduating. India was one of the six choices. We never let our US students live and study in India until they had a prior experience in a less challenging culture. The same for East Africa.

Dave wrote:
(referring to my statement, “I’m afraid I’m getting awfully hardened to the conditions of India…I see it but don’t feel it anymore…You lose some of your humanity here.”) This resonated loudly with me in Peshawar. Driving my huge USAID SUV one day I nearly ran over a woman in a burkha. I had seen so many, she was completely invisible. It made me stop and review the “what, where, why” of my life overseas. I wanted “exotic” and got it. But I had become so inured to everyday sights, many of them disappeared from view.

In my 1964 Indian journal, I wrote of how John Kennedy’s image and influence reached around the world. Four years later, I observed the same thing in Afghanistan, where Peace Corps Volunteers were called — I’ll try to write it phonetically — mar-doom-eh-keh-neh-dee (the people of Kennedy).

Jo wrote:
I enjoy your letters home from your adventures…I know so because I am sad when they end and I want more to read.

No TV. No email. No Zoom. No social media. Making our own entertainment and living in the village of Tengeru.

Janis wrote:
I have always wanted to visit Africa, and I feel as if I’m getting to do so vicariously.

Kirsten wrote:
…my daughter and family spent four years in Nairobi from 2001-2005. I retired in 2002, and two weeks later John and I were on the plane to Nairobi for a month. One of the side trips she arranged for us was to Ngoro Ngoro Crater, beginning, of course, in Arusha. Lots of good memories.

Looking at these photos of our family and house in Tengeru, I’m reminded of what happened the first night we moved in. For some reason, I had to go outside, and when I did, my whole body ducked automatically. The cause? The night sky literally covered in stars with the Milky Way a dense band across the heavens. I’d never seen the sky like that — far out in the country, in a small African village with no ambient light. My body reacted spontaneously, as if to avoid a threat from above. While I stood there in awe, it became clear to me why early peoples were so entranced by the stars. Friends who were in Arusha at the same time and who returned from a recent visit told us this is no longer the case. That sparsely inhabited road between Arusha and Moshi is now developed from one end of the 45-mile stretch to the other. Gone are most of the stars, I bet.

Fern wrote:
I had no idea our paths nearly crossed (so often) before we met. I also spent lots of time in the Usambara mountains in 1972/73. The British colonialists had established an arboretum in Lushoto to test exotic pines, in hopes of finding a good variety for Tanzania, so that they could start a pulp & paper industry. I also had dealings with a British lady (who had been in Lushoto for decades), who had an ENORMOUS Great Dane – stood taller than me – the largest I have ever seen.

Bus trips of your description were also very familiar to me. On one unfortunate voyage, during Ramadan, I had to deal with pious Muslims who would not swallow their saliva and would constantly spit in the aisle – making it treacherous for walking. On that particular trip the bus broke down and what should have been a 5 hour trip was 12…. 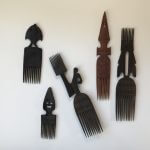 Jim wrote:
I will never forget the scenic beauty of Zanzibar. I envy your opportunity to have spent so much time in this part of the world.

Stephen wrote:
I commented today on Facebook about the photo of the beautiful and exotic African combs you’d collected and stated how they so reminded me of “Afro picks” from the 1960s and after. 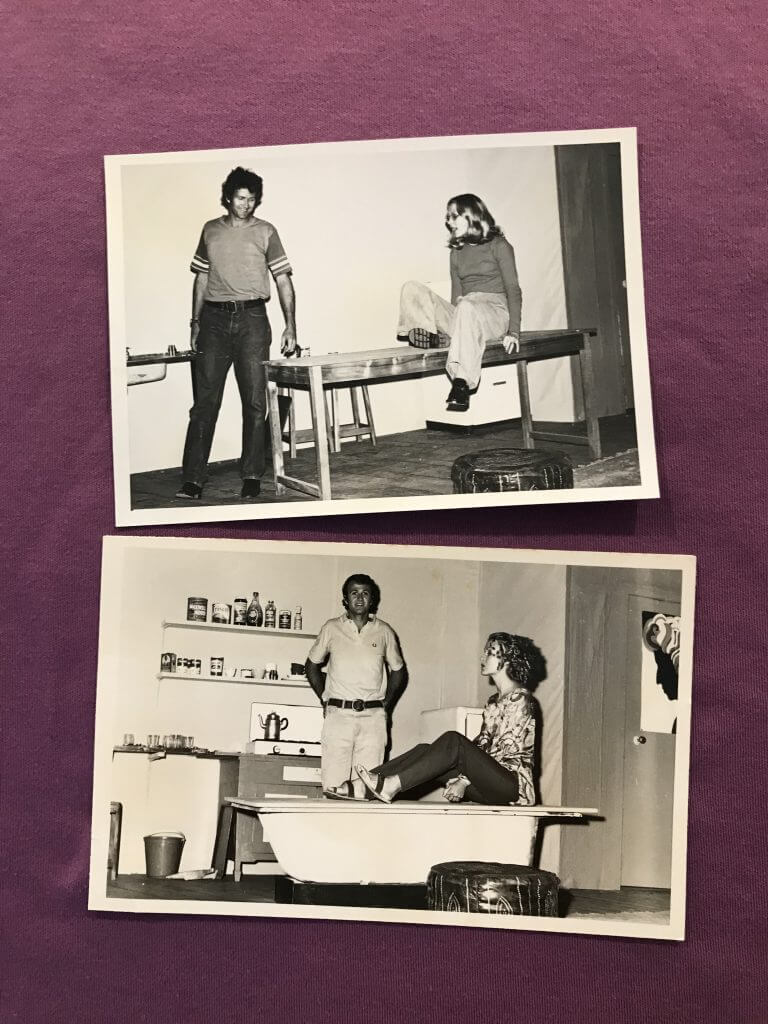 Our last gig at the Arusha Little Theatre: the same scene from “Butterflies are Free” in rehearsal and in performance. My injured left ankle was still so painful that I had to keep it at a 90-degree angle.

Ruth Wrote:
I’ve been reading about your African adventures. I was in Afghanistan just about the same time you were but before the Ariana Airlines crashes. It was only for two days passing through from India home. (I hitchhiked the Khyber Pass from Peshawar.) I was also working for the Lutherans, but in Taiwan….Your stories brought back memories of dysentery, mud roads (in Tibet), difficult ferries, two-inch cockroaches, etc. in a variety of different countries.

PREVIEWS OF COMING ATTRACTIONS: Starting in January, a two-part series on my first project in Somalia — Ethiopian MIGs, camel markets, missing cash and the charm of a country and its people whom modern history has treated cruely.

LET ME HEAR FROM YOU: nancy@nancyswing.com

If you enjoyed reading this post, I hope you’ll SUBSCRIBE by clicking on the button below. Every month, when I post a new excerpt  from my life overseas, you’ll get an email with a link so you can read the next installment. Subscription is free, and I won’t share your contact information with anyone else. Your subscribing lets me know you’re reading what I write, and that means a lot.